In the early 1980s Stephen Hellman was retained by Wrather Corporation to provide the engineering for improvements to the Disneyland Hotel that included at the time the United States largest solar domestic hot water system and the convention center that included Goofy’s Kitchen and Granville’s Steakhouse…later changed to Steakhouse 55.  That relationship continued with the acquisition of the Hughes Flying Boat (aka Spruce Goose).  Hellman & Lober provided the engineering for the dome structure that was constructed next to the Queen Mary Hotel.  When the Wrather Corporation acquired the Queen Mary Hotel we were involved with a number of renovation projects primarily focusing on the restaurants on the Queen.

The RMS Queen Mary that is currently afloat in Long Beach Harbor and is a floating hotel, is a retired British ocean liner that sailed primarily on the North Atlantic Ocean from 1936 to 1967 for the Cunard Line.  The production of hot water for the ocean liners staterooms was produced by electricity and similarly all the cooking was done with electricity.  The Wrather Corporation reasoned that it could reduce its operating cost if the hot water production and cooking could be done with natural gas however placing liquified natural gas on the ship was not an option.  Domestic hot water production was ruled out because of the complexity to route a gas flue to the outside.  There was enough gas consumption with the food service equipment that kept the project viable.  So the challenge was to engineer a piping solution that would allow the Queen Mary to be connected to a land side gas meter with a steel piping system with enough flexibility to allow the ship to list in either direction of the tides. 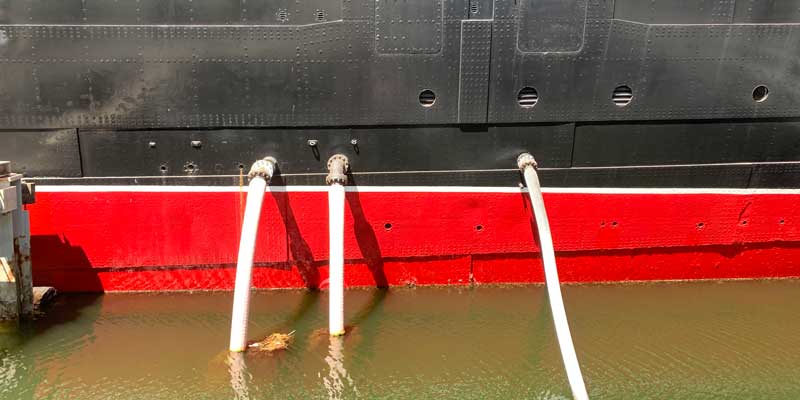 The project was undertaken by Stephen Hellman working with Long Beach Gas Company to secure the meter location and to obtain permission by both LBGC and the City of Long Beach to allow gas to be delivered to the Queen pending approval of the piping design.  The pipe design had to be constructed of Schedule 40 Steel Pipe that would be coated to protect it against the saltwater environment.  The piping configuration was accomplished with joints manufactured by Barco…the design required coordination with the manufacturer though eventually standard flexible fittings were specified; we wanted to avoid both the expense and industrial design if non-standard fittings would ultimately be required.

The gas system remains today and serves the all the food service facilities on the ship.  The Queen Mary project was the last the project completed for Jack Wrather prior to his death in November 1984.